Banner Elk, North Carolina is the home and second home location for many. Thousands travel from all over to visit this breath taking community. Banner Elk has a population of 1,132 residents. Tucked in the Blue Ridge Mountains, this area offers many attractions, trails for hiking, and festivals throughout the year. Whatever your reason for coming to this beautiful place, Banner Elk will never leave you disappointed. Right now in this article I want to discuss the history of Banner Elk, North Carolina. Lets begin.

Cherokee Indians were the first people to ever inhabit Banner Elk, North Carolina. Artifacts that were left behind indicate that they were settled around the Elk River Valley, and they used the are as their hunting grounds. Delilah Baird and John Holtsclaw were the very first two white settlers to come to Banner Elk. They made their home on 480 acres in the year 1825. Shoot to 1911, at this time the North Carolina General Assembly incorporated the town and it became Banner Elk.

Farmers were the earlier settlers, and the occasional fur traders. To this day agriculture is a massive part of economy. Many locals depend on it for their line of work as well as survival, it has been this way throughout history. Banner Elk is known as the Christmas tree capital of the world! For many years the town was all locally owned businesses and were operated by the locals, but in the 1900’s more and more people began to visit Banner Elk for their vacations and short small trips to see the mountains. Due to the amount of visitors as well as frequency, the Banner Elk hotel was built in 1892 to better accommodate the visitors. Still in the year 2021 Banner Elk is one of the most sought after destination for vacationers. 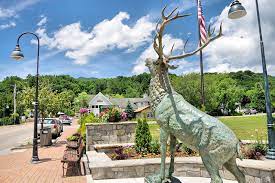 History of the name "Banner Elk"

Delilah Baird and John Holtsclaw, settled in the Big Bottoms of Elk in 1825, this is where the 480 acres of land was. The land became Whitehead farm and reached to the where you will now find Grandfather Home for Children located right near Wildcat Lake. John and Delilah’s had a first child, Alfred B. Baird,  he was the first white child born in what we know now as the Banner Elk Township.  Martin L. Banner was the first permanent settlement in 1848. However, the Banner family originally came from Wales, Martin Banner moved from Forsyth County. As time went on the Banner family expanded in size to 55 total family members,  where they resided became known as Banner’s Elk (Heritage, 1976). This is how Banner Elk received its name. The town named itself  Banner Elk when the North Carolina General Assembly incorporated the town in 1911.

Does Banner Elk Have Elk?

The answer is yes, but not wild Elk that roam and graze in your front yard. The nonprofit nature preserve actually adopted three Elk who are males. This is known as a bachelor herd, and they will live in a new habitat. At one time Elk did thrive in Banner Elk and other parts of the High Country, but have sense become sparse, Their numbers were decimated by over-hunting and loss of habitat in the 18th and 19th centuries, and they were eventually eradicated entirely from the region.  You can go and visit these cute guys at Grandfather Mountain. In the year 2001 the National Park Service began reintroducing elk into Great Smoky Mountains National Park, and they’ve been thriving there ever since.

In Closing, Banner Elk, North Carolina is the symbol of community and growing together. A place founded on leaning on the community for support. A community that strives to be seen from all over the world. Finding a town that uses the natural elements to build the economy is a standard all should pursue in their home towns. Now that you know the history, you will recognize the history is built into the town, and far from insignificant.

Click Below To Learn More About Life At Elk River