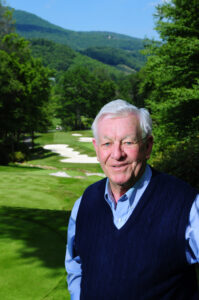 Spencer Robbins was a force in western North Carolina tourism and real estate development dating back more than half a century. He and his older brothers, Grover Jr. and Harry, helped create regional attractions such as Blowing Rock’s Tweetsie Railroad Wild West theme park. The trio were pioneers in the state’s skiing industry through the Beech Mountain Resort and helped popularize a once isolated region. Robbins passed away Nov. 13 at 93. Spencer Robbins’ daughter, Connie Robbins Gentry, paints a picture of her father’s contributions to the High Country.

“What Boone needs is a convention center so people can come here for meetings and conferences and see what a beautiful place it is to live and visit.” That’s what Spencer Robbins said in early November, as he surveyed the development underway in his beloved hometown.

My father dedicated his life to promoting economic development, tourism, job creation and an enhanced quality of life for the High Country. He leaves a legacy that spanned generations and set the stage for communities in western North Carolina to continue to prosper.

Along with his brothers, he developed some of the area’s most popular travel attractions and highly acclaimed resorts. Preserving the history and character of the region were paramount, so in 1957, the brothers returned a storied steam locomotive to the community, creating Blowing Rock’s Tweetsie Railroad Wild West theme park — North Carolina’s first. In the ’70s, they restored the nearly 130-year-old Green Park Inn to the splendor of bygone eras.

The Robbins brothers were also known for their role in Boone-based Hound Ears Club — their first golf course and resort community — and later developed Beech Mountain Resort, the now-defunct Land of Oz theme park — it still hosts the largest Wizard of Oz festival in the country — and residential communities Linville Land Harbor and Elk River Club in Banner Elk. These were just some of the opportunities they developed in what has become one of the state’s most vital industries. In 1968, the N.C. Travel Industry Association recognized the three brothers for their contributions.

Of the three, Spencer was the people person who connected with everyone he met on a personal level. It wasn’t superficial; he genuinely found out what mattered to people and he remembered each one individually. Relationships that started in business transactions inevitably endured as friendships.

“Spencer was a rare individual, a no-nonsense person whose word was his bond,” says Bill Hensley, a Charlotte-based public relations executive who served as North Carolina’s director of travel and tourism from 1965 to 1971. “If he told you something, you could bank on it. Honesty was his tradition whether it was in business or his personal life. And he had a sense of humor that was legendary — he was great to have around for business or pleasure.”

His humor and penchant for storytelling were cherished qualities, and he interjected them into his business dealings in ways that made people want to become part of the developments in western North Carolina. He had a vision for what the area needed and concocting creative ways to entice people to come from near and far.

Bringing in the big guns
In the heyday of TV westerns, Dad brought celebrity cowboys to Tweetsie and to its sister attraction in Pigeon Forge, Tenn. (Today’s Dollywood was originally a Wild West-themed park called Goldrush Junction acquired by the Robbins brothers.) He liked to make the visits personal for the stars — Doc and Festus of Gunsmoke fame ate home-cooked dinners at our house to “give them a chance to relax and feel normal,” Dad would say.

When folks laughed at the concept of skiing in the South, Dad recruited ski instructors from Austria, taking them to Atlanta and Charlotte for Thanksgiving Day parades and to promote the sport at major shopping malls, just in time to inspire winter ski trips to western North Carolina.

In the early ’80s, he and Harry asked Arnold Palmer to design the golf course for their Banner Elk property, but the famous PGA star had several other projects underway. Instead, they approached Jack Nicklaus, who had never designed a North Carolina course. Nicknamed the Golden Bear, he headed one of the world’s largest golf course-design companies.

Nicklaus returned their call with a single question: Could he bring his wife because she had not seen this part of the country?

Nothing could have pleased Dad more; he delighted in sharing the beauty and splendor of the Blue Ridge Mountains. Elk River Club opened in 1984 as the state’s first Nicklaus-designed course.

Love of the land
The Robbins brothers spent hours atop Beech Mountain, hiking and taking in the views. With the Land of Oz, Dad wanted to highlight the natural beauty of the land. So they brought in Jack Pentes, a Charlotte-based artist who worked with them at Tweetsie and later designed the Elk River logo. Pentes and Dad were business partners and great friends. It was at our dinner table one night that Pentes was sketching the property’s gnarly trees, as enamored with the setting as Dad and Harry, and, in a flash, Pentes could see those trees throwing apples at a scarecrow, tin woodsman, and cowardly lion. The Land of Oz opened in 1970. Legend has it that only one of those magical trees was cut down to make room for the yellow brick road.

Rick Foster, president of Elk River Realty, remembers the reverence for the land witnessed time and again across the more than 40 years he worked alongside my father. “Whenever something would be planned, it had to blend in with the mountains,” Foster says. “Utilities had to go underground because it would look better. At Elk River, the waterfalls had to be a park. I’d say, ‘We could sell a hundred condos there.’ And he’d tell me, ‘Those waterfalls have to be for everybody.’”

The 1,200-acre tract that is home to Elk River Club was developed with extremely low density to minimize the number of trees cut and preserve the natural setting. “There are only about 300 total residential units in the club, about 100 condos and 200 homes,” Foster says. “How the end product would look was always a consideration for Spencer; the estate tracts along the ridge of Elk River were larger so that as people look across at that ridge, they don’t see house after house. And he insisted on everything being built with native materials from the mountains.

Foster recalls a prospective buyer who was irked that Spencer had to approve the number of trees cut to make room for the house he wanted. “They don’t have anything better to do?” the incredulous buyer asked. “Actually they don’t,” responded Foster, who joined the Robbins brothers’ business while in college and has spent his career there. “I remember being astounded back in the ’80s to learn that their business was the third-largest employer in the area.” Only Appalachian State University and the TRW electronics manufacturer were larger at the time.

“Not long ago, a man came up to thank Spencer when we were having lunch at a little diner. Back when they were developing Beech Mountain, Spencer and Harry worked with Lees-McRae [College in Banner Elk] to develop a trade school that provided free classes and tools to address the shortage of construction labor. That man told your Dad: ‘You taught me the construction business, and I’ve been employed ever since. I still have that hammer I got in school.’”

Prevost and Dad worked together in the formation of the North Carolina High Country Host, an organization that was a cohesive marketing network for all of the tourism businesses in the region, where Dad served as president from 1980 to 1982. “Due to his hard work, his extraordinary vision and, more importantly, who he was, businesses trusted and respected him,” Prevost says.

My father’s legacy included his integrity, his treatment of others and a sincere desire to promote his community. After their oldest brother lost his battle with cancer at age 50 in 1970, Dad and Harry launched the Grover C. Robbins Jr. Memorial Golf Tournament. The event raises money for the Seby B. Jones Regional Cancer Center in Boone. (Harry Robbins died in 2007, at 82.)

Dad served on the Appalachian Regional Healthcare board for many years, receiving a lifetime achievement award in 2011 from the hospital’s foundation.

Awards were appreciated, but what made him glow was the people who would come back into his life. During hospital stays, nurses and staff would remind him: “Remember: I worked for you at Tweetsie?” “I was a Dorothy at Oz.” “You helped me get through school because I was able to work at Hound Ears or Beech Mountain.” The list goes on.

“He built relationships that lasted years, and people just felt good working with him.” Foster says. “He made you feel like family.” ■

Editor’s note: Spencer Robbins was a fine businessman, but an even more extraordinary family man, Connie Robbins Gentry notes. He is survived by the love of his life, Grace, his wife of 64 years; four sons and daughters-in-law; one daughter and son-in-law; nine grandchildren; and two great-grandchildren.

Click Below To Learn More About Life At Elk River